October 2017 was the debut of our #SQUASHTOBERFEST event, focusing on prioritizing issues in Magento Commerce and Open Source 2.2 to be squashed by the community. We had high expectations for this event, and the community did not let us down. We had the largest number of pull requests in a month ever.  As a token of our thanks, any contributor with two or more submitted pull requests over this event will receive a limited edition Magento t-shirt. 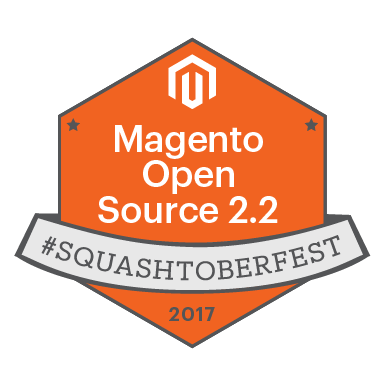 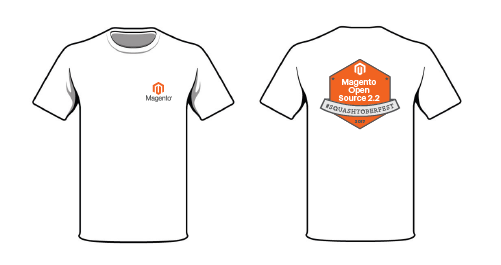 During October, we received a staggering 464 pull requests to our Open Source, Commerce, and MSI repositories. We had an amazing 127 community members contribute, of which 64 were first time contributors.

In addition to the pull requests, a staggering 1031 issues were closed in GitHub, with 107 of these issues fixed by the community. Over the last couple of months, we have seen a real focus on closing and working through issues, with over 2000 issues closed in the last two months alone.

This event took place on October 15th, 2017 at the Academy+Plus in Cluj-Napoca. Fifteen developers assisted with 5 pull requests.

On October 16, 2017 at WeWork in New York several developers gathered together to work on contributions. The day resulted in 8 pull requests provided and 7 issues by the community.

Following on from the contribution weekend in Septemeber, TechDivision hosted a contribution week focusing on the Multi-Source Inventory (MSI) project. Over this week, 12 pull requests were worked on, and the new functionality of Inventory Import/Export was implemented. 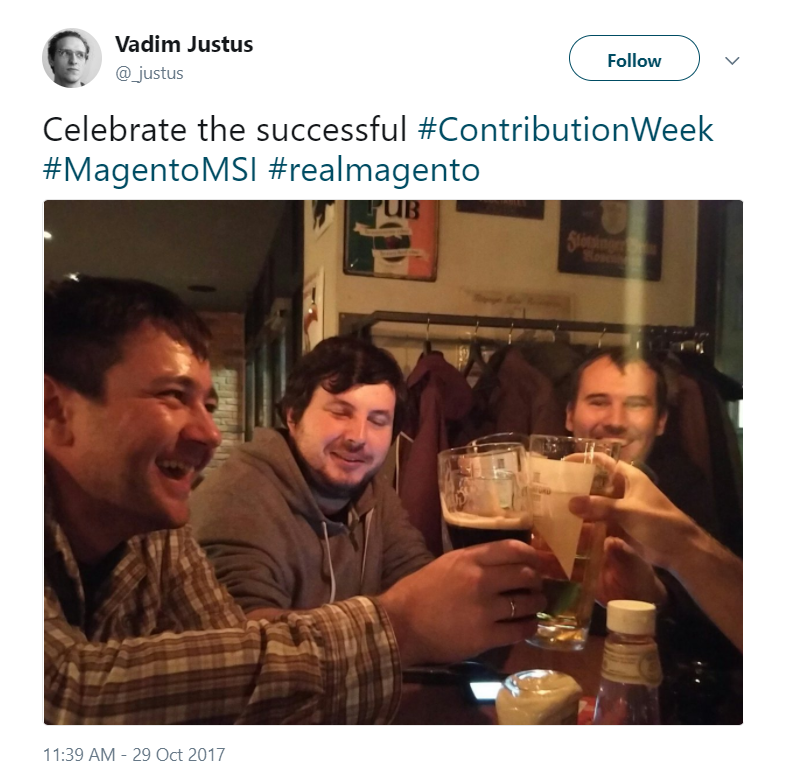 If you are interested in participating in this project or any other project, please email us at engcom@magento.com or take a look at the project overview page.

Over the month, we have been asking for some tweets and pictures to show your experience with #SQUASHTOBERFEST. Here are some of our favorites. 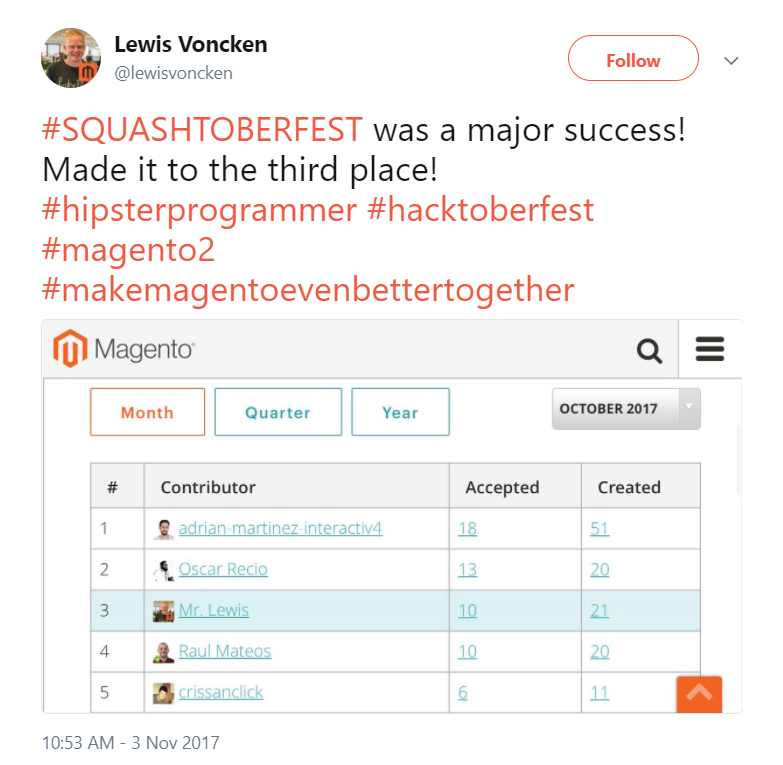 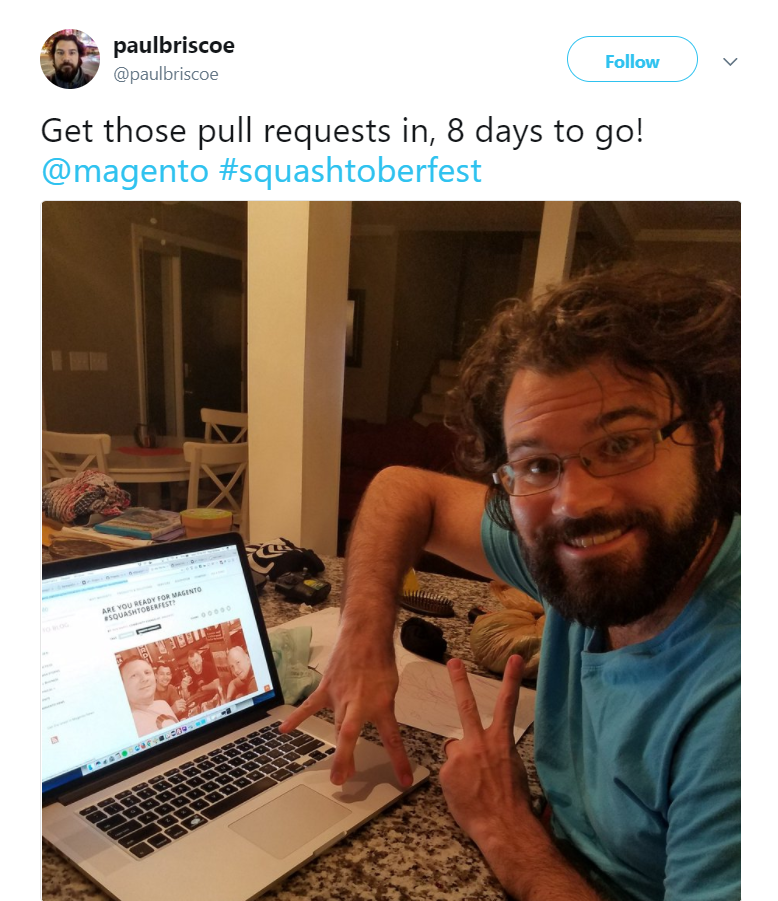 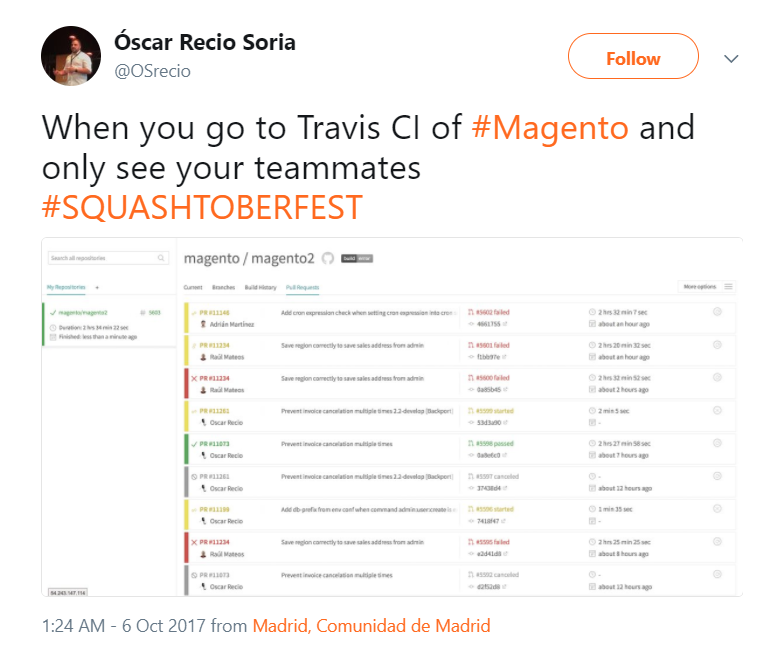 For the month of October, we would like to extend a special thanks to the team at interactiv4. They have been keeping us busy with a staggering 143 pull requests created over the complete month.

We would like to thank all the contributors for their hard work and dedication over the month of October that has helped make #SQUASHTOBERFEST a fantastic success. We look forward to seeing what contributions the final two months of 2017 will hold.