As we move into 2018, it is important to take a few moments to look back at how far we, as a community, have come in 2017. Firstly we would like to say a massive thank you to all who have contributed throughout the year. For this update, we would like to share with you the yearly statistics and some choice memories of the year.

At the end of 2017, we have only ~900 open issue reports on GitHub and ~140 pending pull requests with fixes. We processed almost 4000 issues reports. Although only 40% of the reports have been acknowledged and added to our backlog, many others have been addressed directly on GitHub or fixed by community members via pull requests. 2017 was a year in which the Magento Community significantly improved the quality of Magento 2.

Excluding Magento employees, our top 5 contributors over 2017 are as follows:

We would like to thank everyone involved with the Solution Partners contribution program. Through this program, we have seen some amazing contributions to our main and Multi-Source Inventory (MSI) projects. It has been fantastic to see our partners get involved in such a way. Our top 5 partner contributions in 2017 are as follows:

We would also like to highlight a few contribution events from December that we think really carried the spirit of open source contribution.

On December 13th and 14th, Amasty hosted a contribution day in Minsk. Focusing mostly on the Multi-Source Inventory (MSI) project, this event saw 11 pull requests created , many of which came from first-time contributors. 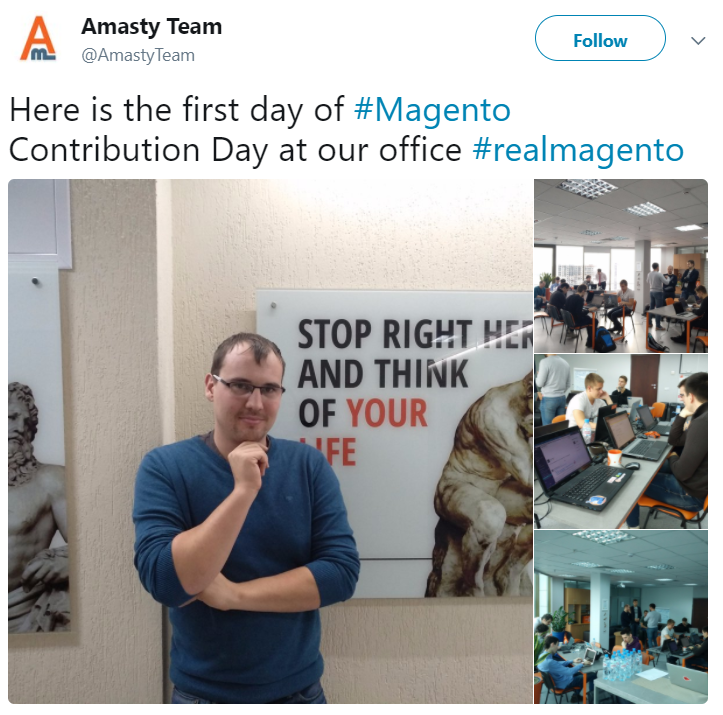 It only seems fitting, but we hosted the final contribution day of 2017 in the Magento offices in the Ukraine. As part of the MageConf event, 100+ developers got together on the 15th of December and provided an exceptional output of over 40 pull requests to the main repository and 6 pull requests to the Multi-Source Inventory (MSI) project. 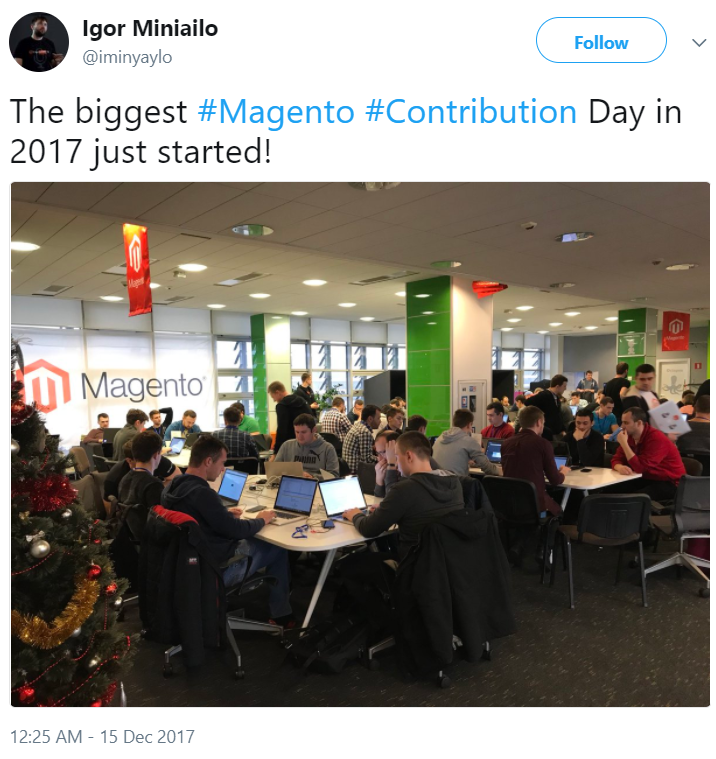 2017 was a great year for the community. Together, we are helping shape the future of Magento. We have been blown away by how well the community has responded, and 2017 would not have been the same without each contributor. To end this review, we would like to share some thoughts from a selection of community members.

“2017 was a very cool year. I met so many good and friendly developers around the world. Contributing is a nice opportunity to work side by side with leading Magento architects and bring the agency view to Magento.” – Lars Röttig

“2017 was a great year for the Magento community with the start of the Magento Community Engineering Team. With this step, Magento really embraced the community and started to work together with the community to create an even better product. I participated in the Magento Contribution Day during Meet Magento NL and had a great experience developing alongside Magento developers. This really gave me better insight into the decision-making process of developing software. Highlight was the Squashtoberfest with a lot of PR's created and issues resolved..” - Danny Verkade

“The community engineering initiative is one of the best things to come out of Magento this year in my opinion. It's very encouraging as a contributor to see my work triaged and reviewed in a timely manner, which I've seen issues with on other projects I've contributed to in the past” - Max Chadwick

“It's been a great experience being able to look behind the scenes while the community engineering team ramped up. Learned a lot about what goes into delivering software for as big a project like Magento. Looking forward to shifting even more of the process to github to open up collaboration even further in 2018.” – Kristof Ringleff

“This year has been an exciting year, being able to feel part of something and knowing that your additions or fixes can be enjoyed by millions of people. It is a sensation that cannot be described. I have also had the opportunity to work side by side with the Magento Community Engineering team and it is great to know their point of view of the platform.

I invite all people to contribute to the project in this way you have, in my opinion, a better vision of what Magento really is, rather than an eCommerce platform, we are a community like I have never seen.” - Oscar Recio

As always, if you are interested in finding out more about contributing to Magento, we recommend getting involved in the community engineering slack (email requests to join to engcom@magento.com). We also have a wide selection of projects currently running. If you are interested in participating in one of these projects, take a look at the project overview page to and let us know. We look forward to continuing the journey with you all in 2018.